have released their Supercharger network

Built secretly, Tesla and SolarCity have revealed the first six Superchargers, which will allow the Model S and other electric cars that have the hardware fitted to drive long distances with ultra fast charging, 100% free through California, Nevada and Arizona.

Tesla has grabbed the moral environmental high ground with the ambition to have these Solar Powered SuperChargers installed throughout the U.S.A. and then in 2013 - Asia and Europe

Eventually the whole of the USA, Asia, and Europe will have access to FREE ENERGY to drive 100% free, wherever they want to! 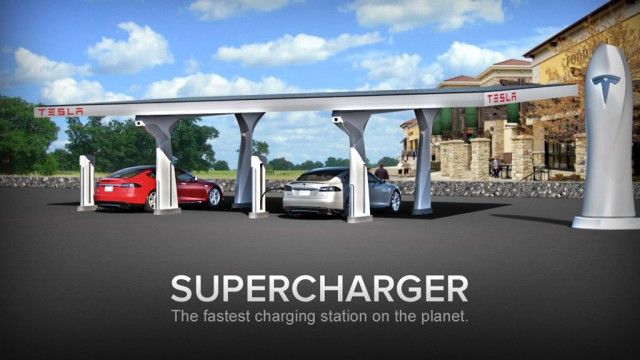 Spend your dollars on research into free, clean energy, instead of buying poisonous drilling, mining, and shipping equipment and polluting the planet, paying ever rocketing prices for ancient fossilized sunshine just for electricity production.

The Supercharger uses electricity from a solar carport provided by SolarCity, which makes it an extremely low or free energy cost after installation.

Allowing you to drive free forever.

I think that's the handling more than anything else," says Dayo Gomih at Tesla.

The greatest advantage to owning or leasing an electric car is the capability to use FREE renewable power to charge the batteries in the car, and to put the excess into the grid for others to access, allowing you to drive free forever.

"Tesla Motors is an automotive rarity — a startup, and a car company that comes out of Silicon Valley, not Detroit or Japan or Germany. Tesla hopes the technology it uses to make electric cars will upend the industry"

"At Tesla, we did, I think, receive some unfair criticism because we had the Tesla Roadster, and people would say, 'Well, why are you making this expensive sports car?' As though we somehow felt that there was a shortage of sports cars for rich people or something," Musk says. "But, in fact , even though I would try to take pains to say, look, our goal from the beginning has been to drive forward the electric car revolution, and we needed time to refine the technology — get to version two, get to version three. And really, with version three — the $30,000 car — that's where it becomes mass market." Elon Musk, CEO, Tesla Motors

"I believe that everyone who comes in this weekend is going to buy a car from us in the next 10 years" - George Blankenship, ex-Apple Retail product manager said

“Tesla’s Supercharger network is a game changer for electric vehicles, providing long distance travel that has a level of convenience equivalent to gasoline cars for all practical purposes"

"However, by making electric long distance travel at no cost, an impossibility for gasoline cars, Tesla is demonstrating just how fundamentally better electric transport can be” said Elon Musk, Tesla Motors co founder and CEO.